I think I’ve decided that the Golden Tea Floral Block is too fussy to turn into a pillow for C.  It is turning out huge — 25″ at not quite the end of Part 2. I had been thinking I’d make it fit by turning it 45° and bringing the four points of the square together in the middle of the back of the pillow form. I think I’ll pin it like that and show it to C and ask her opinion. I’ve got another idea for a more contemporary-looking pillow (that I’ll talk about below), and if I don’t use this for C I’ll continue with the Extension pattern which will be the next Mystery Make-Along. I have plenty of yarn.

The final Part 3 of this MMAL will be released next Friday. Jen said in her video tutorial that this is a very simple pattern compared to the others in the Floral series she’s doing. I’m not sure if I’m happy about that or sad since I’ve concluded I’ll probably not do the others. I still want to do the Riebeek-Kasteel Weekend Block because I think it’s gorgeous, but I’ve decided this thick, layered style isn’t that appealing to me aesthetically. It reminds me of a heavily decorated cake. Also considering it takes so much more time to do and uses so much more yarn than “flat” crochet, I think I’ll stick to flat. But, that said, I’m really glad I’ve done it and I’m looking forward to the rest of the MMAL.

In complete contrast to the busy, colorful Golden Tea Floral is the super-simple Tiny Cables CAL Throw. Here it is where I left it off last night at 89 rows/8.5 skeins of Mary Maxim Worsted. This is about 1/2 way done, not including the border.

I’m trying to stay positive about this pattern and enjoy the repetition, but boy I wish I had made it less wide instead of following the pattern starting chain. The CAL is running in a Google Group (that’s a first for me) and I noticed many other people having issues with the “big” cable. I posted some pointers since the pattern is written very badly at this part (it’s actually wrong), and the promised video they had was just tips from one of the pattern testers that were very misleading. I’m glad I posted the pointers because several people said it helped. I’m going to write up some suggestions for CGOA for the next CAL they run because they really have potential to draw people into the organization, but I don’t think this CAL was effective on several levels.

Next, I made another hat for the hat drive at my local yarn store to benefit Caps for Kids Beantown. I followed the pattern for the Just-Like-That Hat by Jenn Wolfe Kaiser, with the addition of a few rounds of hdc in the back loop just to make it less boring.

The pompom is a little wild but I thought a little kid would like it big, so I left it. I used every last inch of a ball of Premier Yarns Serenity Chunky that I picked up for $2 in the clearance bin at A.C. Moore. (If you noticed this week’s blog post title, you’ll guess that this is not all that I picked up on that shopping trip.) I loved the yarn!

Finally, the second square of the Wrapped in Jamie CAL went live late last night and I worked it up this morning. 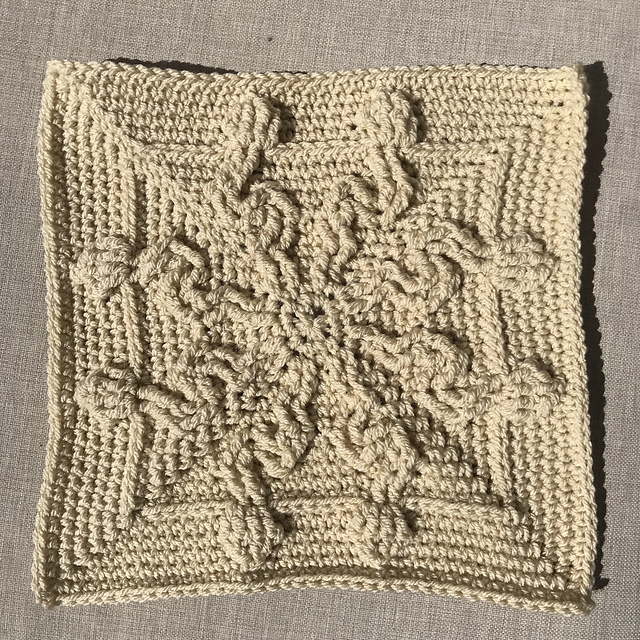 This one is supposed to look like little snakes slithering away from the center. This is a reference to a little carved, wooden snake that was given to Jamie (one of the main characters from the Outlander series) by his older brother when they were children. I think it kind of looks like sperm which would also be appropriate for this book series! Next I have to add the square border which I’ll try this time with a smaller hook to make it look neater than the last and also, hopefully, to make it use less yarn so I don’t have to buy more.

Last week, I mentioned I wanted to participate in the BIPOC MAL which is already running. The idea is to make a pattern from a BIPOC designer or with yarn from a BIPOC dyer. On a related note, if you haven’t heard of the BIPOC in Fiber crowdfunder, a team of people is trying to make a website that will be a resource for finding such makers. When I contributed earlier in the week it was only at 35% funded, but I’ve since seen on Instagram that it has surpassed the original goal! Additional contributions would be welcome, I’m sure.

The pattern I’ve picked out for the MAL is the Cottage Throw Pillow by TL Yarn Crafts (pattern picture on the right). This is the pillow I think C would like for her dorm room. My plan, however is to do it in two colors (Aubergine & Orchid), which means I’ll have to do it in the round. I’m going to make a swatch of the Tunisian crochet Smock Stitch (which I’ve never done before) and follow a tutorial for a cowl to figure out how to do Tunisian in the round (which I’ve also never done before). I won’t be using the same weight yarn and I bought an 18″ pillow form, which I think is bigger than suggested in the pattern, so I guess I’ll only be following the pattern very loosely.

Also, one of my tasks for last week was to take a look at my Stylecraft Special DK stash and start identifying colors for the Nature’s Walk Blanket CAL. I haven’t made my final color selections but I did convince myself I have enough stash to do the blanket. 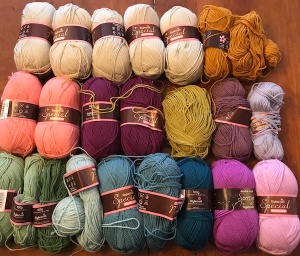 If I was to buy the yarn pack from Black Sheep Wools (which I’m not going to do because of the expense), it comes with an additional 6 patterns to go with the CAL’s 6 free patterns. Instead, I’ve been making a Ravelry bundle of “filet in the round” patterns like the Victorian Lattice square that I can incorporate. (And I’ll buy one of the designer’s other patterns to compensate her for her work since I’m not buying the pack.)

Finally, I wanted to mention a long-term upcoming project which is the Botanica Blanket CAL by Cypress Textiles (again, this is a pattern picture). The yarn pack will be my reward to myself if I do not buy any more yarn until the end of the year (not counting if I need more pinks to finish the Jamie blanket). I love everything about this blanket!! I know, I know, I have CALitis, but there’s no way I can not do this one! 😂 I just won’t do it while the CAL is running. I really wish designers would stop tempting me with gorgeous CAL blankets!

The SO. MUCH. YARN. title comes from my visit to A.C. Moore (which was actually two visits to two different stores) and a “ten for ten” sale at LionBrand.com. I am keeping in mind my intention this year of maintaining stash positivity, so I’m going to focus on and celebrate the great deals I got. For instance, in the “ten for ten” I got 10 cakes of the Comfy Cotton Blend and 20 skeins of Heartland for $42.80 shipped. 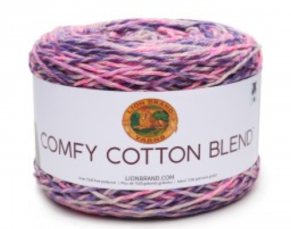 Then, at A.C. Moore, they had Cotton Colors, which is basically a clone of Scheepjes Whirl except 100% cotton, that I got for $4.25 a cake after coupons. I ended up getting 12 of them between the two stores in gorgeous colors! I also picked up a few skeins of other yarns on clearance for $2 that I’ll use for the hat drive. I didn’t “need” this yarn but I will put it to good use so I’m not going to get all negative about messing up my destashing goal. Retail therapy is cheaper than psychotherapy after all.

Lastly, for incoming, I won a coloring contest and got gifted a new pattern by The Loopy Stitch called Crossroads. Doesn’t this look like a fun granny? It’s been added to the queue! 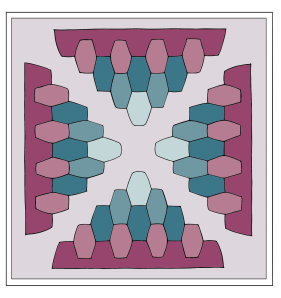 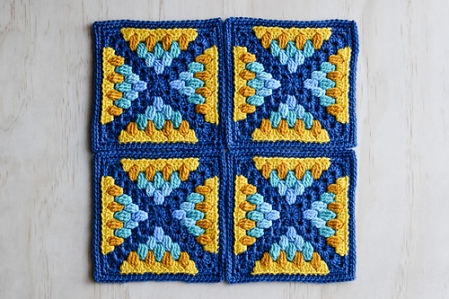 For this coming week, my crafty goals are:

Yep, I’m going to be busy. I hope you all have some fun crafty plans for this week too.

P.S. This is an update for the Year of Projects blog-a-long group on Ravelry. At the beginning of the YOP year, starting on July 1 for most, participants make a list of goals for the coming year (here’s mine) and then post weekly updates on their progress. Visit the Ravelry group to see posts from other participants and to find out how to join us.

View all posts by rubydolling

Welcome to my blog. My name is Maria and you may know me as Ruby Dolling on Facebook and Instagram, and JustMagicMaria on Ravelry. You can learn more about why I blog on my About page.

Find me as JustMagicMaria on 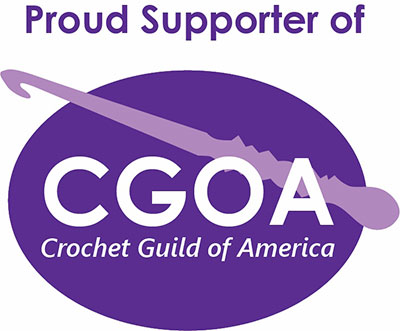 Well, at least the Casual Weekend Sweater fits my husband! (I made it for me. Oops.)
Happy Yarn Mail from @thecozycottagecrochet! Thanks Hannah! I love my prize for the #vanyacal . ❤️🧶💯
I thoroughly enjoyed the Baithin Blanket Scrap-Busting CAL by Carmen Heffernan of Annie Design Crochet! Such a pretty patyern. Mine is half-size because it's going to an org that wants them 40"x40", bit I'll definitely be making the remaining squares sometime in the future.
My Blaithin Blanket Stashbusting CAL squares are done. Now to block and join!
Just finished the fabulous Nature's Walk CAL as a baby blanket. Gorgeous pattern by @sandracherryhrt
Vanya Cowl almost done!
Loving #RozetaCAL! On to part 3.
V is for Vanya Cowl! Loving this pattern by @thecozycottagecrochet! Perfect use for this hand dyed, lace weight Merino.
Boo!
Really enjoying the Shameless Cowl CAL by Becky of Indulge Crochet Designs! @indulgecrochet #indulgewithbecky #shamelesscal
Do I need another crochet-along? Define "need". 😂 This is the Bláithín Blanket Scrap-Busting CAL.
Loving this Golden Tea Floral Block from a pattern by @hooksntales. Already 18" though! Was going to be a cushion but this is part 1 of 3. Hmm... 🤔 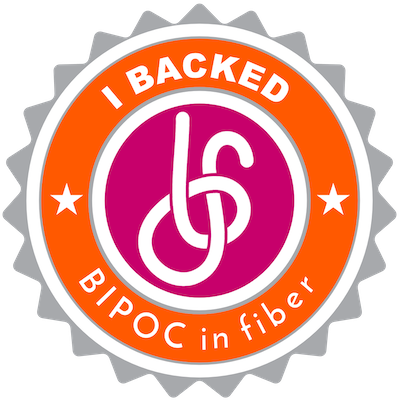